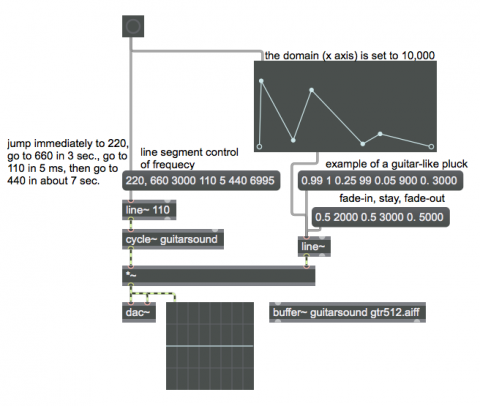 The line~ object is intended for use as a control signal for audio. You don't listen to line~ directly, but it's very effective as a controller/modifier/modulator of other signals. A pair of numbers (i.e. a two-item space-separated list of numbers) tells line~ a destination value and a time (in milliseconds) to get to that value. For example, the message 0.99 100 tells line~ to change its signal value from whatever it currently is to 0.99, moving linearly sample-by-sample toward 0.99 over the course of 100 milliseconds, calculating the intermediate signal value for each sample along the way. The result is a smoothly changing signal.

You can also send line~ a list that has more than two numbers. Every two numbers in the list are viewed as a "destination value / transition time" pair. The output of line~ follows the instructions of the first pair of numbers, then immediately follows the second pair, and so on. Thus, one can create a variety of control function shapes by specifying the destination value and transition time for each line segment.

The message box just below that, labeled "fade-in, stay, fade-out", describes a very slow fade-in and fade-out. It goes to an amplitude of 0.5 in 2 seconds, stays there for 3 seconds, then fades to 0 in 5 seconds. The same sort of line segment function can also be used to control other aspects of a sound. The message box labeled "line segment control of frequency" specifies frequency values (to send a constantly changing frequency to cycle~) instead of amplitude values. It causes the frequency of the message box to jump immediately to 220 Hz, glide to 660 Hz in 3 seconds, shoot quickly down to 110 Hz in 5 milliseconds, then glide up to 440 Hz in about 7 seconds.

The function object allows you to draw a line segment function by clicking at the desired breakpoints. You can set the domain of that function (the total time of the x axis) in the object's Inspector or with a setdomain message. In this example, we have set the function's domain to 10 seconds (10,000 ms). When the object receives a bang, it sends out its second outlet a list of destination value / transition time pairs that are designed to go to a line~ object, and that correspond to the shape of the drawn function. So, in this example we use one button to trigger the function to send a 10-second line segment function to the line~ that controls amplitude at the same time as we trigger the message box to send a 10-second function to the line~ that controls the frequency of the cycle~. The result is continuous modulation of the oscillator's frequency and its amplitude.