A demonstration of phase distortion synthesis 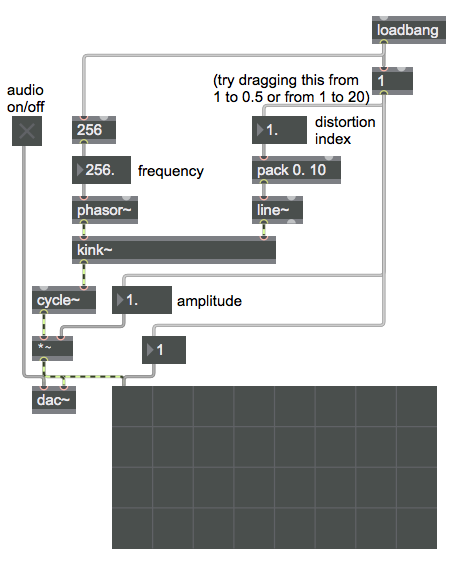 Phase distortion is a synthesis technique that was used in some Casio synthesizers in the 1980s. In traditional wavetable synthesis, a linear upward ramp signal is used as a phase index to read cyclically through a wavetable containing a particular waveform (a sine wave being the most common). In MSP you can do that by connecting the output of a phasor~ object, which generates a cyclic upward ramp from 0 to 1, to the right (phase offset) inlet of a 0 Hz cycle~ object (containing one cycle of a cosine waveform by default). However, the kink~ object distorts the linear ramp of phasor~, putting a bend (a.k.a. a "kink" or "knee") in it at a designated point. When that distorted ramp is used to read through the waveform in cycle~ the result is a distorted sinusoid that has more harmonic content as the distortion (the sharpness of the bend in the ramp) becomes more severe. Thus the harmonic content of the output varies dynamically as the bend point of the kink~ object changes. This patch allows you to vary the bending effect of the kink~ object, and see and hear the effect.