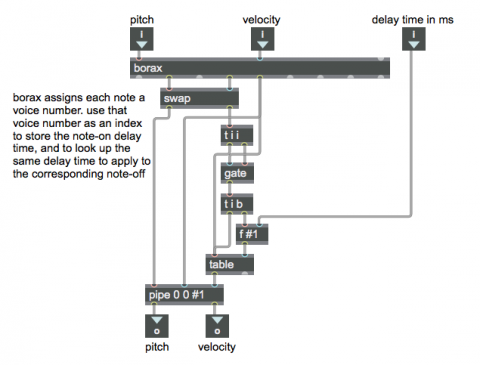 To delay a single bang message by a certain amount of time, use the delay object. But to delay any other sort of message—a number, a list, even a group of different messages—use pipe. The pipe object dynamically allocates memory as it stores more and more messages, so it can keep track of many messages at once, even if they arrived at different times and have different delay times (unlike the delay object, which can only hold one bang at a time).

The incoming pitch and velocity values go to a borax object, which generates a unique "voice number" for each note it receives. The voice number comes out after the pitch and velocity values, but the pitch value and the voice number both go to a swap object, which swaps the message order so that the voice numbers goes out the right outlet first, and then the pitch goes out the left outlet. In the case of a note-on message, the velocity value opens a gate, and the voice number goes through the gate, bangs the f object holding the delay time, and stores the delay time in the table using the voice number as the index. It then sends that delay time to the right inlet of pipe. The velocity and pitch values thus get delayed that amount of time by pipe. In the case of a note-off, nothing gets through the gate, but the voice number is still used to look up the delay time for that note, so that the note-off velocity and pitch will be delayed the same amount of time by pipe. The number of inlets the pipe object has is determined by the number of initializing arguments that are typed into it. It can delay any type of items (int, float, or symbol), depending on the argument. There should be one argument for each inlet, plus a final argument specifying the delay time. In this example, the delay time in the f object and in pipe is #1, which will be replaced by the typed-in argument when this patch is used inside another patch, or which will be 0 if nothing is typed in.

For a demonstration, see the example "Try the delaynote abstraction".