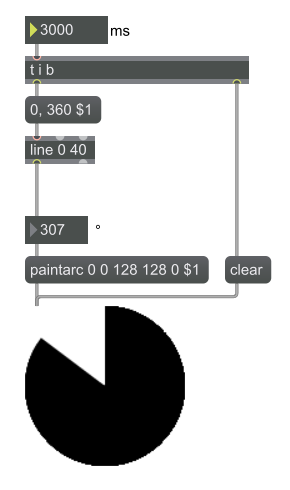 This example shows how to make a countdown progress indicator by progressively filling a circle. The circle is filled with an arc, with a radius coming from the position 12 o’clock (at time 0%). At time 25%, the first upper right quadrant is filled, and so on, until 12 o’clock (at time 100%), when the circle is filled. The circle is being drawn on an lcd object by sending the message paintarc followed by 6 arguments; the first four arguments are coordinates, and the last two are the starting angle and ending degrees. This in turn is being driven by a line object that is sending a stream of numbers between 0 and 360 across the duration set by the number box at the very top of the patch.