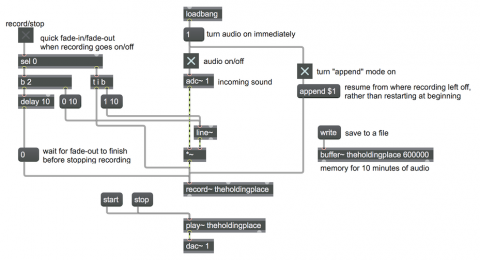 This patch demonstrates the use of the append attribute to concatenate several recordings in the same buffer~. The patch includes a buffer~ theholdingplace object that has set aside enough memory to store up to ten minutes of audio. When the patch is loaded, MSP is turned on and the append 1 message is sent to the record~ theholdingplace object. The patch is now ready to record multiple excerpts. Try clicking on the toggle marked "record/stop" to start and stop recording, and make several recordings. Once you have done that, you can click on the start message box to play back the concatenated recordings.