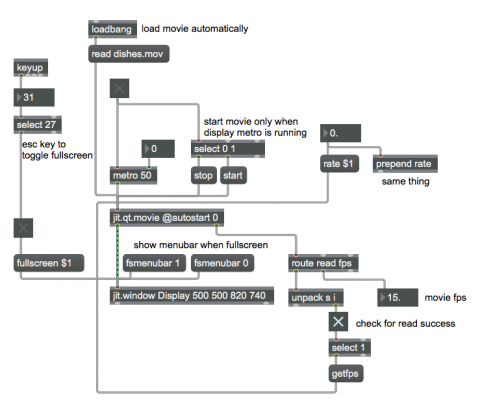 This patch shows some fundamental techniques for playing a video in Max.

When the patch is first opened, the loadbang object triggers a read message to jit.qt.movie (which has been replaced in more recent versions of Max by jit.movie) to open a video file. By default, jit.movie will have its autostart attribute set to 1, to begin playing the video automatically as soon as it's loaded. If you want to control the playback explicitly, you can type in @autostart 0, as was done here. Once the file is read into jit.movie, it sends a read message out its right outlet with two arguments: the name of the file, and a 1 or 0 to indicate whether the read operation was a success. You can use that success indicator to trigger other messages. In this case, we use it to query the jit.qt.movie object itself regarding the file's frame rate, with getfps, which causes an fps message to be sent out the right outlet.

You can set (or get) many attributes of the movie's playback. This patch shows how to construct a message to set the playback rate, either by using the prepend object to prepend the word rate before the number, or by using a message box with a changeable $1 argument.

To display the video, the output of jit.movie should go to a jit.window object (or a jit.world object, which uses the computer's GPU for greater efficiency). This patch shows some of the attributes of jit.window. The rect attribute—the top, left, bottom, and right corner coordinates of the window—can be provided as typed-in arguments. That window can also be toggled between fullscreen or normal with the fullscreen attibute (fullscreen 1 and fullscreen 0 messages), triggered in this case by typing the esc key. And the decision whether or not to show the menubar when the window is shown in fullscreen mode is determined by the state of the fsmenubar attribute. (Note: if you set fsmenubar off, be sure to have a way to get out of fullscreen mode, other than with a menu command. The esc key takes care of that here.)