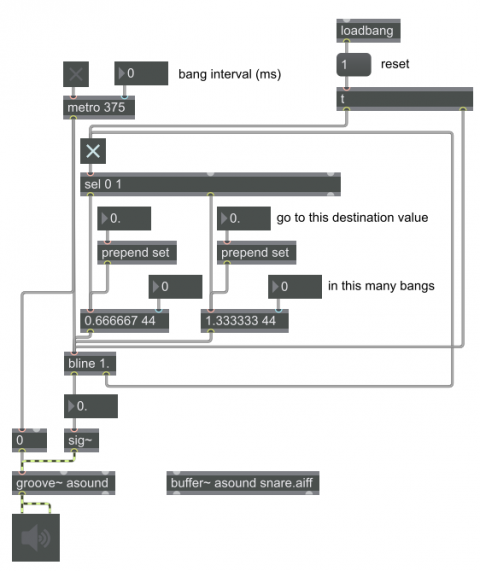 This patch demonstrates the bline object, and also shows how it might be used to trigger a different transposition of a sound with every bang of a metro.

The bline object is comparable to line, in that it is intended to interpolate linearly from its current value to a new value, but instead of generating intermediate values at regular time intervals, it produces an intermediate value each time it receives a bang in its left inlet. Whereas line receives a destination value and an amount of time to get there, then begins to go toward that destination value, bline receives a destination value and a number of bangs to get there, but does nothing until it receives subsequent bangs. It was designed to work in Jitter as a way of synchronizing interpolated values with frames of a video or of a 3D GL render, but in fact it can be used in any situation where you want to interpolate over a specific number of events.

In this patch the bline is initialized to the value of 1 by its typed-in argument, and the loadbang object triggers a message of 1.333333 44 to go to bline, making it ready to receive bang messages. When you turn on the metro, bline will begin sending out values that go toward 1.333333 over the course of 44 bangs. When it reaches its destination after 44 values, bline sends a bang out its right outlet, flipping the toggle and thus sending a new message 0.666667 44 into bline, so that it will then begin to interpolate to that new value over the course of the next 44 bangs from the metro.

The output from bline sets the value of the sig~ object, which provides a new playback rate to the groove~ object each time it is triggered. The values 1.333333 and 0.666667 represent rates of 4/3 and 2/3, causing a transposition up a perfect fourth and a transposition down a perfect 5th, with microtonal transpositions in between.