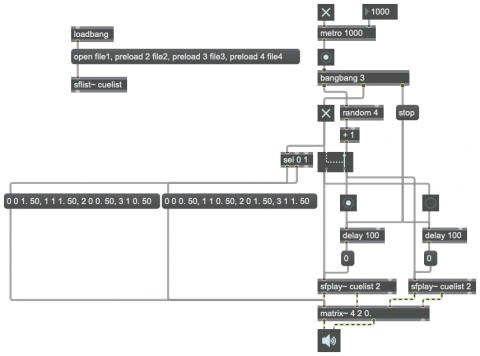 This examples shows a way to choose automatically from a list of preestablished sound cues, with a crossfade between cues rather than a sudden switch.

The cue-choosing algorithm here is very simplistic—we just choose a cue number at random with a random object (either by clicking on the button or using the metro to send a bang once per second). And if all we wanted to do was switch from one cue to another, that's all we'd need, and we'd really only need one sfplay~ object to do that. However, our goal is to make a crossfade between the currently playing cue and the newly chosen cue. For that, we need two sfplay~ objects, sending the cue selections to alternating objects, and we need a way to mix and fade the two sounds.

The matrix~ object serves as an audio mixer, and is good for what we need to do here. The four channels of audio from the two sfplay~ objects are mixed down to two channels in matrix~, and the messages to matrix~ turn down the amplitude of one sound while turning up the amplitude of the other sound. (For basic information about matrix~, see the example titled "Using matrix~ for audio routing and mixing".)

A toggle object is a good way to alternate between two choices. To alternate between the sfplay~ objects, the bang from the button triggers the toggle, which a) switches the outlet of the ggate object (a.k.a. gswitch2) and b) triggers the appropriate messages to the matrix~. So, to summarize what happens each time the metro sends out a bang: cancel any bang that might be scheduled in either of the delay objects, switch the outlet of ggate and trigger the correct messages to fade out the current sound cue and fade in the new sound cue, then choose the new sound cue a random, sending it out the desired outlet of the ggate, and also scheduling a 0 message for the previous sfplay~ to be stopped after the crossfade has been completed.