Abstraction for delay with stereo panning 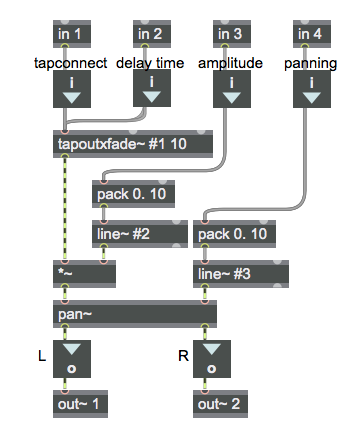 For another example of the use of the tapconnect message, see "Abstraction for crossfading delay times of a remote tapin~ object". The abstraction in that example is a file called tapoutxfade~.maxpat, which is used as an abstraction within this patch. Another abstraction used in this patch is the pan~.maxpat file presented in the "Constant-intensity panning subpatch". Both of those files will need to be in the Max file search path in order for this example to work.

Note that in this patch the delay time, the gain, and the stereo panning of the sound are all to be provided as Max float messages coming in the designated inlets; the float messages will be converted to signals and interpolated to the new value in 10 milliseconds by line~ objects to avoid clicks. The initial values for those parameters can be specified as typed-in arguments in the parent patch, which will replace the #1, #2, and #3 arguments in this patch.

Note that, in addition to inlet and outlet objects, this patch has in and out~ objects. That's done so that this abstraction can be used either as an ordinary abstraction subpatch or as the contents of a poly~ object. Both of those usages are demonstrated in related examples. Save this abstraction with the file name "tapoutstereo~.maxpat" somewhere in Max's file search path. This abstraction is used as a subpatch with that name tapoutstereo~ in the example, "Multiple delays with stereo panning", and it is used inside a poly~ object in the example "Polyphonic panned delays with poly~".

See also, for comparison, the example "Abstraction for delay with quadraphonic panning" and related examples.