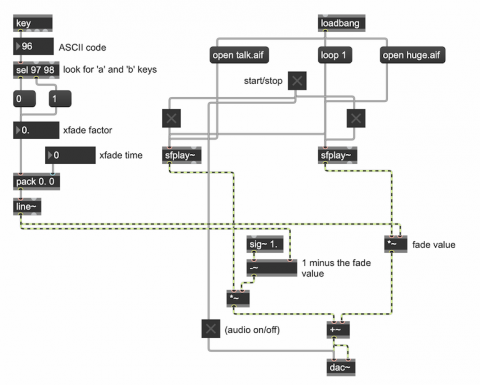 This patch shows how to crossfade between two sounds. Initially, two different sound files are loaded into two different sfplay~ objects. When you click the toggle marked "start/stop", both sound files will play, but you'll only hear the one on the left because its amplitude is being multiplied by a constant signal value of 1 from the sig~ 1 object, while the one on the right is being multiplied by a signal value of 0 from the line~ object.

To see this crossfader implemented as a mix~ abstraction that you can easily use in any patch, take a look at "A useful subpatch for mixing and balancing two sounds".