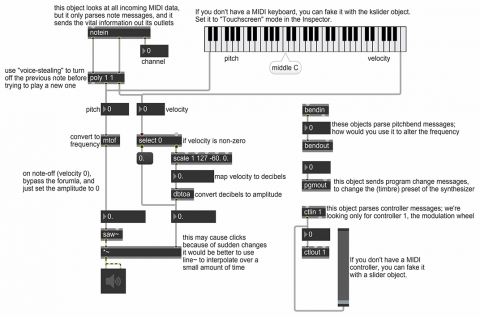 This is a bare-bones monophonic MIDI synthesizer that uses the pitch and velocity information from incoming MIDI note messages to control the frequency and amplitude of a sawtooth waveform. It works, but it could definitely be improved. It's nearly identical to the even more bare-bones "Overly simple MIDI synth" example, but with one improvement, the addition of the poly object, described below.

One not-so-obvious problem with designing a monophonic synthesizer is the fact that people usually don't play a keyboard in an idealized way, ending one note and then starting another. More commonly, people play legato (the Italian word for "tied", meaning connected), in order to get a smoother-sounding transition between notes, by pressing the key of a new note before releasing the key of the previously-played note. Even if the player is not consciously thinking of playing legato, it's very likely that s/he will play the keyboard in that slightly-overlapping manner. That can be a problem when you're making a monophonic synthesizer in MIDI, because the note-off message of the previous note will come after the note-on message of the new note, and could confusingly turn off the new note.

To address that problem, in this example we use the poly object to limit the number of note messages being sent to the synthesizer, so that the synth never gets more than one note message at a time. The poly object keeps track of the number of note-on messages (pitch-velocity pairs) it's holding, and it will turn off the oldest note (the one it has held the longest) when it gets a new note that exceeds its limit. This is the most common way of limiting the number of simultaneous MIDI notes. In our case, we're limiting the number of possible notes to 1, and implementing "voice-stealing" (turning off the previous note before playing the new one) in order to avoid the overlapping note problem described in the previous paragraph.

Possible improvements to this synthesizer include:
- handling overlapping or simultaneous incoming MIDI note messages by producing polyphonic synthesis (multiple simultaneous tones in response to multiple note messages).
- an ADSR amplitude envelope to control the loudness better
- implementation of MIDI pitchbend messages to alter the frequency commensurately
- vibrato and/or tremolo effect by means of a low-frequency oscillator (LFO), with the modulation wheel controlling the depth of the modulation effect
- portamento to glide from one frequency to another
- envelope to control the timbre of the instrument so that it changes character over the course of the note, probably dependent on the MIDI note velocity
- etc.