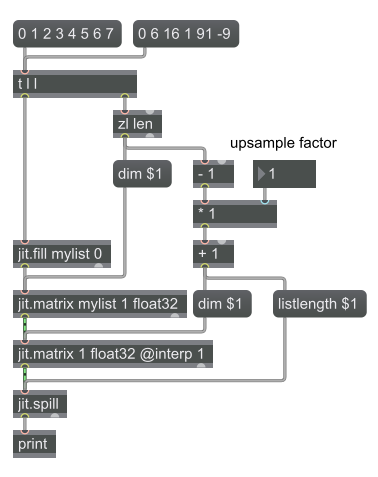 The term "upsample" is used in digital audio and video to mean increasing the sampling resolution of a sound or an image. More generally the term can be used to mean increasing the size of a set of numbers by some factor, keeping the original numbers and using interpolation to determine the values of the new intermediate numbers.

This patch demonstrates a way to use Jitter to upsample a list of numbers by taking advantage of the interp attribute of the jit.matrix object. (Many other Jitter objects have this same interpolation capability.)

Two objects that enable the conversion of a list to a matrix and vice versa are jit.fill and jit.spill. When jit.fill receives a list of numbers, it places those numbers in the named matrix at the specified location (in this case cell 0 of plane 0), and sends a bang out its outlet when done. On the other end, when jit.spill receives a jit_matrix, it outputs those numbers as a list, the length of which is specified by its listlength attribute.

Because we may not know the length of the incoming list of numbers, we use zl len to find the length. We use that number to set the dim attribute of the jit.matrix mylist object, and we also multiply it by the upsampling factor to determine the output list length. (That last part is not exactly true. We actually subtract 1 from the length of the incoming list, multiply that by the upsampling factor, then add 1 to that to determine the output list length. That results in us having the desired number of intermediate values, while beginning and ending on the same values as the original list.)

The bang from jit.fill triggers the output of jit.matrix mylist, and the next jit.matrix object—which now has a larger dimension, and which has its interp attribute turned on—upsamples that matrix with linear interpolation.