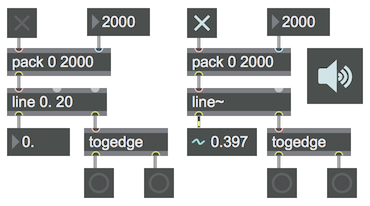 This patch shows how to make a fade-in or a fade-out using the line object (for numbers) or line~ (for a signal). You provide the line (or line~) object with a two-item list signifying a destination value and an amount of time, in milliseconds, to get to the destination. If you wanted to fade the brightness of a video in Jitter, or the amplitude of a sound in MSP, you would specify the fade time (in this example you would do that using the number box above the right inlet of pack) then the number 1 for a fade-in or 0 for a fade-out. A toggle object is useful for this purpose, because it allows you to switch back and forth between 1 and 0.

When line or line~ reaches its destination, it sends a bang out its right outlet. You can use this bang to trigger something else to happen next, or even to do something like re-trigger the toggle to fade back in the opposite direction. The togedge object will send a bang alternately out of one of its two outlets each time it receives a bang, similarly to the way a toggle triggers a 0 or a 1 alternately. In effect, it's like a combination (internally) of a toggle object, a change object, and a sel 1 0 object. You can use this to trigger one action when the fade is completed in one direction, and a different action when the fade finishes in the other direction.