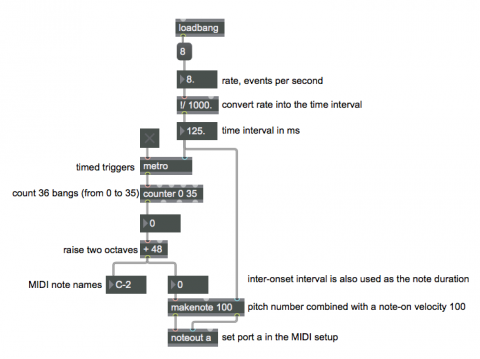 This example plays a 12-note chromatic scale over three octaves with timed triggers.

The rate of the trigger (events per second) is converted into the time needed by the metro object by dividing the rate by 1000 to be expressed in ms. As shown in the patch, the rate initially set to 8 per second will be 125 ms, which is then used as an argument for the metro. When the toggle turns on the metro, metro starts sending bangs at its time interval to the counter object which is set to count 36 bangs (0 to 35) as needed to play 12-note chromatic scale over three octaves. By adding 48 to these numbers, they are raised two octaves to use pitches in the mid-range starting from C2, and are used as the pitch note needed by the makenote object combined with a note-on velocity. The value used as time interval of the metro is also used as the note duration of the makenote which sends the pitch number and velocity to the noteout object to transmit the note-on/off messages to a MIDI device.