A subpatch suitable for use in poly~ 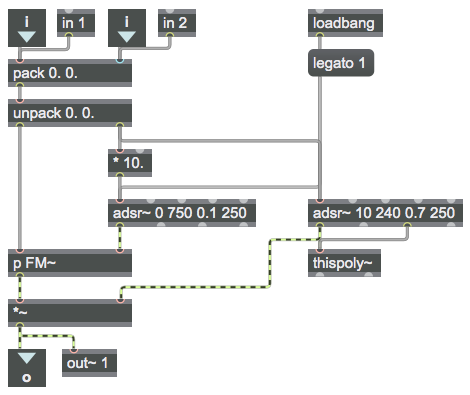 This patch demonstrates how one might make an audio patch that can serve as a voice in a polyphonic synthesizer. It's quite similar to the FMtone~ patch shown in “Generating a simple 2-operator FM tone”, but with some modifications that make it suitable for use with the poly~ object so that it can be used polyphonically. Some important features been added in this example.

The pack object in this patch allows the parent patch to send in the frequency and amplitude information either as separate numbers in the two inlets or as a single two-item list in the left inlet, similarly to the way that noteout and many other Max objects work. But regardless of how the information is sent in, when something comes in the left inlet pack will send out both items, and unpack will send them to the proper place.

The amplitude information is used by two different adsr~ objects, one for controlling the output amplitude and one for controlling the modulation index. The modulation envelope has a faster attack time and a slower decay time than the amplitude envelope, so the timbre evolves slightly differently from the amplitude. The legato 1 message to adsr~ tells it to turn "legato" playing on. That means that when adsr~ starts a new envelope it should start from whatever amplitude it is currently at, rather than leap to 0 to start the new envelope. This will give a smoother (more legato) transition from one note to another if a new note is triggered before the release time of the previous note has fully elapsed.

The FM portion of the synthesizer is encapsulated inside a patcher object (the p FM~ subpatch). This is done just for organization, to make the window a little less complex visually, not for any particular functional reason.

The thispoly~ object is important because it allows a subpatch inside poly~ to communicate some things about its state to the poly~ that contains it—things that might be unique to that particular voice. The most significant things you can do with thispoly~ are to mute/unmute a voice, or to set/unset its "busy" status. You can stop computation in a particular voice of a poly~ by sending a mute 1 message to a thispoly~ object in the voice patch. To restart MSP computation in that voice, send mute 0 to thispoly~. An extremely useful feature of the adsr~ object is that when it completes an envelope it sends a mute 1 message out its third outlet, and when it starts a new envelope it sends out mute 0. This is specifically meant to be sent to thispoly~ by the adsr~ that is controlling amplitude, as is done in this example, in order to turn off computation in the voice whenever the amplitude is 0. For voice allocation in response to note or midinote messages, poly~ needs to know whether a voice is already busy synthesizing or whether it's available to synthesize a new note. If the signal in the inlet of thispoly~ is 0, poly~ considers that the voice is available to play a new note, but if the signal in the inlet of thispoly~ is nonzero poly~ knows that that voice is already busy. For this purpose, too, the adsr~ that controls the amplitude is the perfect object to provide the "busy" or "not busy" signal, because when the envelope is at 0 that means that the note is over and the voice is once again available. Thus, thispoly~ is a necessary object for eliminating unnecessary MSP computation and for voice allocation, and its logical partner is an adsr~ object that is controlling the patch's output amplitude.

“Polyphony with the poly~ object” shows this patch being used inside a poly~ object. You will need to download this patch and save it with the name "FMsynth~.maxpat" in order for that example to work.