Six upper harmonics of a fundamental 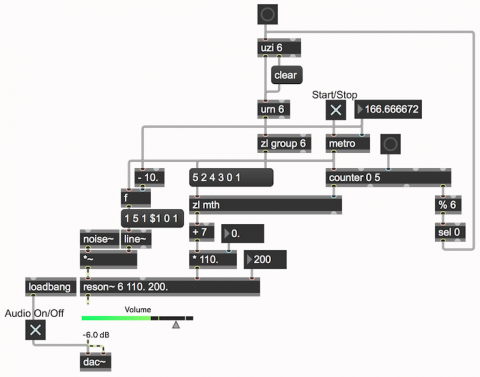 This is an algorithmic generator of sound patterns based on the number 6. The patch a) uses the urn object to generate a list consisting of a random ordering of the six digits 0 to 5, b) uses a metro to bang a counter six times per second in order to count through that list of digits, c) uses those six digits to produce six frequencies representing harmonics 7 through 12 of a fundamental (110 Hz, initially), and d)uses those frequencies to set the center frequency of a resonant bandpass filter (the reson~ object) to produce six differently filtered noise bursts. Each pattern of six frequencies, played at a rate of six notes per second, is repeated six times, and then a new pattern is selected. (The urn is re-triggered whenever the counter has completed six cycles.)