Refer to a lookup table remotely 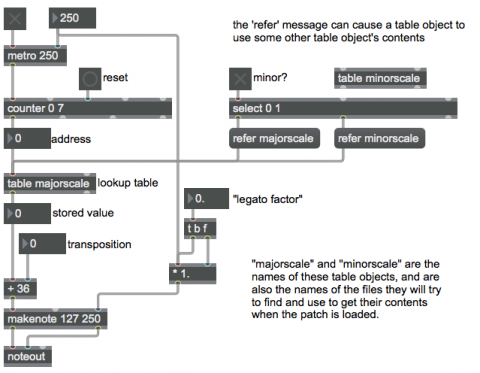 The name that's typed in as an argument also serves as the name of a text file that the table object will try to read when the patch is opened. If no such file is found, the table will be empty (all it values will be set to 0) or it will use the saved data if its embed attribute is set (its "Save Data With Patcher option was checked). In this example patch, the data of the two scales is embedded in the patcher file, but can also be stored in separate files named majorscale and minorscale.

The basic scale pattern of pitch classes then needs to be transposed my some number to put it in the desired key and register. The patch also includes a "legato factor" applied to the duration of the notes. The time between note onsets, also known as the "inter-onset interval" or "IOI", is determined by the metro interval. That value is then multiplied by the legato factor to determine the actual duration, from attack to release, of each note. In this way, the duration of the notes is dependent on, but not identical to, the IOIs. A legato factor greater than 1 creates note overlap, while a legato factor less than 1 creates a detaché or staccato effect.