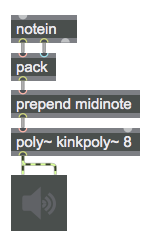 This example shows the patch from “Phase distortion synthesis in a poly~ subpatch” being used as a subpatch inside the poly~ object. You will need to download the patch from that example and save it with the name "kinkpoly~" in order for this example to work.

This shows how simple the use of poly can potentially be if the underlying synthesizer module is designed appropriately. The synth notes can be triggered by MIDI pitch and velocity information. Instead of using the target message, as shown in “Polyphony with the poly~ object,” this patch uses the message midinote with pitch and velocity as arguments to that message (e.g., midinote 60 127). When the poly~ object receives midinote messages, it allocates voices automatically by assigning that note information to whatever voice is not "busy". Each voice reports whether it's busy or not by sending its amplitude to its thispoly~ object (see "Phase distortion synthesis in a poly~ subpatch"). So, by designing the subpatch to keep track of each voce's busy status in this way, we have permitted poly~ to allocate voices on its own in response to midinote messages, resulting in a very simple way to trigger notes in the parent patch.

Note that although this example (and “Phase distortion synthesis in a poly~ subpatch") show poly~ being used to implement simple polyphonic synthesizers that respond to pitch and velocity information, the contents of a poly~ can be anything—soundfile playback, etc.—and can have any number of inlets and outlets.