Pass a certain percentage of bangs 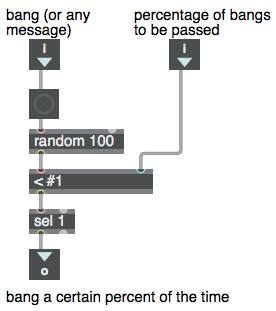 To make a random decision between two things, you can use the decide object. To make a probabilistic decision between two things, with one thing being more likely than the other, you can use the random object to choose randomly from a larger set of numbers, then assign a majority of those choices to mean one thing (and the remaining minority to mean the other thing). An easy way to do this is with the < object. In this example, a bang in the left inlet will choose a random number from 0 to 99, and that number will then be tested to see if it's less than some specified 'percentage' from 0 to 100. If it is, the < object will send out a 1, causing a bang to be sent out the outlet. This means that, over a fairly large number of incoming bang messages, approximately the specified percentage of them will result in output.