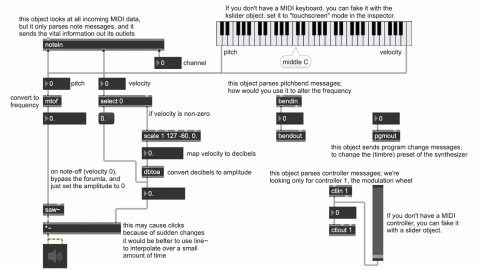 This is a bare-bones monophonic MIDI synthesizer that uses the pitch and velocity information from incoming MIDI note messages to control the frequency and amplitude of a sawtooth waveform.

Possible improvements to this synthesizer include:
- handling overlapping or simultaneous incoming MIDI note messages by producing polyphonic synthesis (multiple simultaneous tones in response to multiple note messages).
- an ADSR amplitude envelope to control the loudness better
- implementation of MIDI pitchbend messages to alter the frequency commensurately
- vibrato and/or tremolo effect by means of a low-frequency oscillator (LFO), with the modulation wheel controlling the depth of the modulation effect
- portamento to glide from one frequency to another
- envelope to control the timbre of the instrument so that it changes character over the course of the note, probably dependent on the MIDI note velocity
- etc.