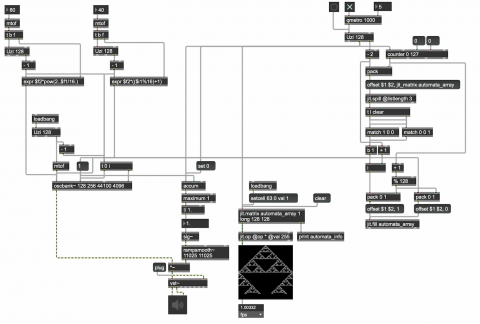 Relevant to the musical applications of cellular automata, this is a patch that controls a bank of 128 oscillators based on the on-off state of a row of cells in a Jitter matrix that is generated by some very simple rules of a cellular automaton.

I won't try to explain every detail of this patch, but will point to a few main features. The interval of the qmetro will determine how frequently the program reads a row of on-off states (1s or 0s) from a matrix, uses them to turn on or off oscillators in a oscbank~ object, and generates a new row of on-off states according to some simple rules (which are then visualized in the jit.pwindow object). The number boxes on the left are to choose the fundamental pitch of the oscillators. The number box on the top left produces 8 octaves of frequencies of a 16-notes-per-octave equal-tempered scale; the other number box tunes the oscillators to 16 harmonics of the fundamental pitch. The amplitude is adjusted in inverse proportion to the number of oscillators being played. If so desired, one can load a VST plug-in and run the sound through that for added processing.