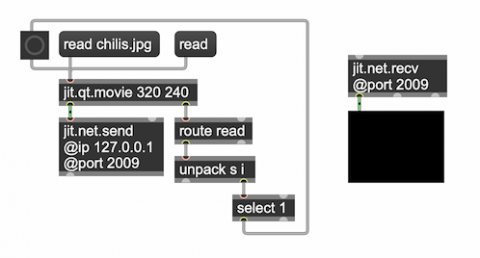 For sending large amounts of media data—such as video—over the internet, TCP is more reliable than UDP because the receiving computer can check that it has received packets in the proper order, and it sends back an acknowledgement messages so that the sending computer knows whether the packet was successfully received. For large packets, it's best to put all the data into a Jitter matrix and send that via TCP. Of course, if you just send a jit_matrix message, the receiving computer wouldn't know where to find the data, so the jit.net.send object, when it gets a jit_matrix message, sends all the data contained in that matrix; when the jit.net.recv object gets the data, it puts it into a Jitter matrix of its own, then sends out the address of that matrix. Note that for these objects, unlike for the udpsend and udpreceive objects, the IP address and port number are attributes rather than arguments. In this example we're sending to the same computer via the localhost IP address, 127.0.0.1.

Click on the message box that says read chilis.jpeg. When the jit.qt.movie object (or jit.movie) has loaded the image, it sends a read chilis.jpeg 1 message out its right outlet, and that message triggers a bang to send out its matrix and transmit that via jit.net.send to the jit.net.recv object on the designated IP address and port number.