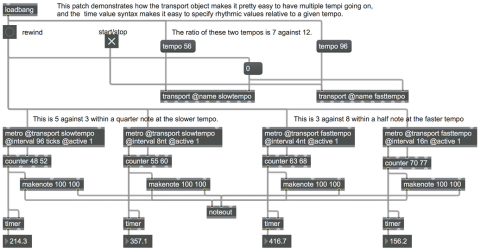 For example, in this patch there are two transport objects, one named slowtempo and one named fasttempo, and their tempos have been set to be 56 bpm and 96 bpm respectively. The two metro objects on the left refer to the "slowtempo" transport for their timings, and the two metro objects on the right refer to the "fasttempo" transport. To further complicate matters, each metro is using a different rhythmic value as its time interval. From this example it should be clear that named transports make it easy to create music that is polymetric, polyrhythmic, and that even has multiple simultaneous tempi governing different streams of rhythmic activity.