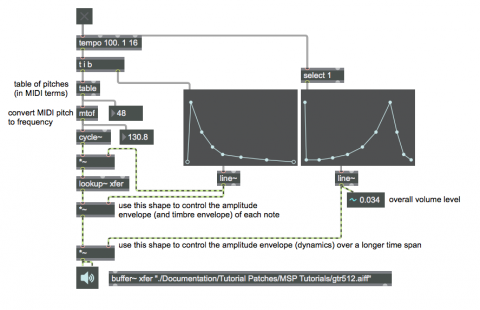 First, turn on audio (below), then start the tempo object.

The MIDI pitches read from the table object are converted into frequency by the mtof object, and are sent to cycle~ to use the sinusoidal waveform to scan through a more complex waveform, known as "waveshaping" synthesis.

The lookup~ object uses the buffer~'s data because they share the same name, xfer.

The directory used by the buffer~ is the place in memory where we store the sound clip (512 samples) that will serve as the lookup table (transfer function) for the lookup~ object, scanning the buffer~ with a sinusoid (cycle~) at the desired frequency.