Make a yes-or-no decision with a given likelihood 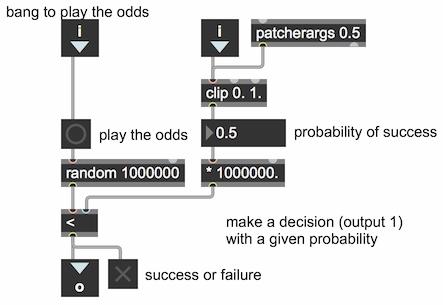 The probablility P of something occurring is defined as the number of looked-for outcomes divided by the number of possible outcomes. For example, the probability that heads will show up on an unbiased coin flip is 1 (there is one instance of heads on the coin) divided by 2 (there are two possible outcomes, heads or tails), which means P = 0.5. With this definition, any probability can be described as a number in the range from 0 (impossible) to 1 (absolute certainty).

This patch allows you to specify a probability P from 0 to 1 (as a typed-in argument or as a float in the right inlet) and then send a bang (or any message) in the left inlet to make a yes-or-no decision (1 or 0) using that specified probability. The likelihood that the output will be 1 corresponds to the stated probability. That is, over many iterations, you can expect that the output will be 1 in proportion to P, relative to the number of iterations.

We do this using the random object, which outputs a randomly chosen integer from 0 to one less than its argument. Because random only outputs integers, we multiply the fractional value P by the same range as the random object has. For example, with a probability P equal to 0.5 (the default), 0.5 times the range of 1,000,000 equals 500,000. So, if the number chosen by random is less than 500,000, a 1 will be sent out; otherwise, a 0 will be sent out.