How the adsr~ object works 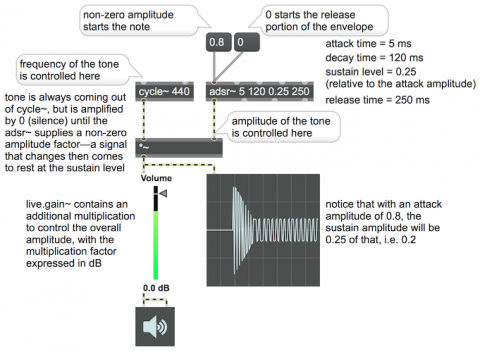 The adsr~ object provides a signal in the shape of an ADSR envelope (attack, decay, sustain, release) commonly used in synthesizer design. You specify an attack time in ms (time to get from 0 amplitude to peak amplitude), a decay time in ms (time to settle to the sustain level), a sustain level (an amplitude factor, not a ms time), and a release time in ms (time to return to 0). Those values can all be supplied as initializing arguments, and/or as floats or signals in the second, third, fourth, and fifth inlets. (Although signals are allowed, it's more common to use float values.) When a non-zero value is received in the left inlet, that determines the peak amplitude of the attack; the attack and decay portions of the envelope are completed in the designated amounts of time, then the output signal stays at the sustain level until a 0 value is received in the left inlet, at which point the release portion of the envelope is enacted.

An ADSR envelope can be used to control any aspect of a sound—amplitude, filter cutoff frequency, modulation amount, etc. In this example, we use it to control the amplitude of a tone, by sending the output of adsr~ to one of the inlets of *~.