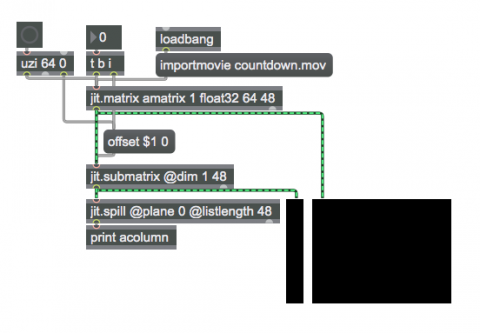 If you want to isolate a particular subset of a matrix—such as a single column, or a single row, or really any rectangular portion of the matrix—a handy object for that purpose is jit.submatrix.

The patch also demonstrates the jit.spill object, which prints out the contents of a matrix as a list message. The typed-in attributes specify which plane to access and the desired length of the output list. In this case, there's only one plane in the input matrix, and only 48 values contained in it, so jit.spill outputs the entire matrix as a single list, which is printed in the Max console window.

Note that the jit.matrix object loads in the first frame of a video file with the importmovie message, and its arguments modify the format of that frame by reducing its size to 64x48 and converting its data type from char to float32. The small size of the matrix is more manageable for this example, and the use of float32 causes the values to be printed as 0. and 1. instead of the char values 0 and 255. The dimensions and data type of the imported image have adapted to the specifications of the jit.matrix's arguments.

And, if we wanted to print out all 64 columns of the matrix at once, we could use the uzi object to generate numbers 0 to 63 and feed them to the message box to generate 64 consecutive offset messages (instantaneously) to jit.submatrix.