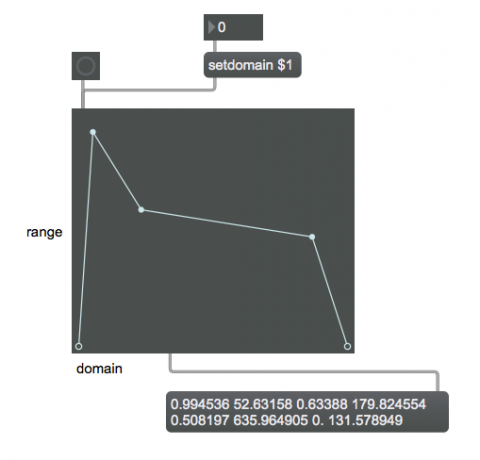 A two-dimensional graph like the one shown here shows the relationship between two variables, x and y, and is said to be a graph of "y as a function of x" or "y over x". That means that it shows how the y variable changes with each corresponding x value. In most musical situations, the x-axis designates time (with x=0 designating a starting point in time) while y designates a value that changes over time according to a certain shape or curve. Since the x value (time) increases at a constant rate, the shape of the function shows us how y will change over time.

Try changing the domain and the range, and then sending a bang to see how the resulting list changes. Notice that in this patch we use the pak object to combine the minimum and maximum values in a single setrange message. The pak object is used to combine several individual numbers together into a list, much like the pack object. The crucial difference between the two is that the pak object sends out a list any time it receives something in any inlet, whereas the pack object sends out a list only when it receives something in its leftmost inlet.