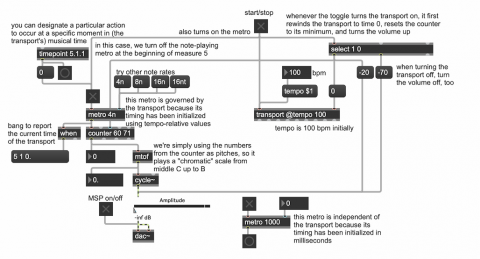 This patch does a very simple musical task. When the metro is turned on (and the transport is running) it will trigger a counter at regular intervals. The interval is a quarter note initially, because of the typed-in argument, but you can change the interval by clicking on one of the message boxes that provides a different rhythmic note value. The actual time in milliseconds will be calculated internally, based on the 'tempo' attribute of the transport. At a tempo of 100 beats per minute, a quarter note equals 600 milliseconds.

The numbers from the counter progress in a loop from 60 to 71. Those numbers are used as if they were MIDI pitch values, middle C up to B, which are converted to the appropriate frequency with the mtof object, and sent to a cycle~ oscillator.

Note that the toggle at the top labeled "start/stop" does several things. When it's turned on, it sends out the number 1, which is first detected by the select object. ("If the input is equal to 1, send a bang out the first outlet.") The select object turns the volume of the live.gain~ object to -20 dB (live.gain~ internally interpolates sample-by-sample over a specified ramp time, 10 ms by default, to avoid clicks), resets the transport to time 0 (specified in ticks), and resets the counter to be ready to send out its minimum value. Next, the 1 from the toggle turns on the transport, and turns on the metro.