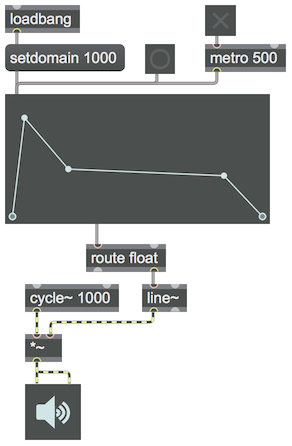 The function object permits you to design a shape made up of line segments, and then you can send that information (out the second outlet) to a line~ object to cause a changing signal with that shape over a specified amount of time. When the function object receives a bang, first it sends out its initial value as a float (0. in this case), then it sends out a list of subsequent values and destination times. (Connect the second outlet of function to a print object if you want to see the messages.) The combination of function and line~ is handy for designing and triggering an amplitude envelope of a sound, as in this example, or any other sort of envelope or control function.

The total amount of time for the shape, in milliseconds, is determined by the domain of the function. You can set the domain with a setdomain message.

One potential problem with an amplitude envelope like this is that if you re-trigger the envelope before it has completed, it will leap back to the zero point, potentially causing a click in the sound. However, if you want, you can filter out those initial float values with a route object, as in this example. That way, instead of line~ snapping to 0. each time the function is re-triggered (because of the intial float 0. message it sends out), it will continue from whatever value it was at at the moment of the re-triggering.

In this example, a bang will cause a one-second note; if the envelope is re-triggered after less than a second (as it will be if you click fast repeatedly or if you turn on the metro), you’ll notice that there’s no annoying click, because the envelope starts from wherever it was each time it’s triggered.