Delay with tapin~ and tapout~ 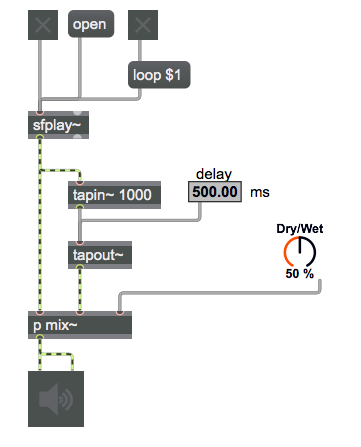 In addition to the delay~ object, another way to implement a circular buffer for audio delay is with the pair of objects called tapin~ and tapout~. Those two objects are always used as a pair; the outlet of a tapin~ object should only be connected to the left inlet of a tapout~ object. The tapin~ creates a buffer space in memory, and the tapout~ object accesses that memory some amount of time in the past; the patch cord connecting those two ensures that they refer to the same place in memory.

Unlike with delay~, for tapin~ and tapout~ you specify the buffer size and the delay time in milliseconds rather than samples.

Most user interfaces for delay provide the user with a control for the delay time (either specified as an absolute time or as a tempo-relative rhythmic unit) and a control for the balance between the original (“dry”) sound and the delayed (“wet”) sound. We’ve provided those two controls here, as a live.numbox and a live.dial.