Curve in a transfer function 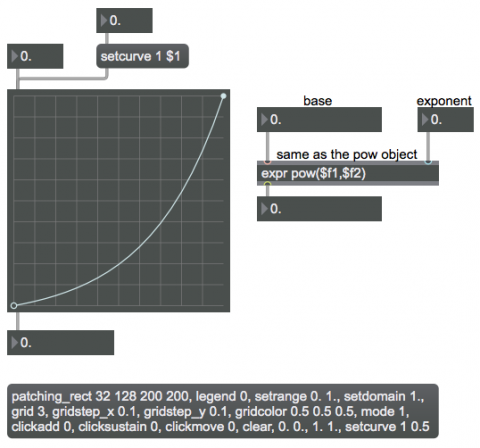 You can obtain values that change exponentially or logarithmically by using the pow object or by using the pow($f1,$f2) function in the expr object. Numbers in the left inlet that stay between 0 and 1 will stay between 0 and 1 at the output. An exponent of 1 (in the right inlet) will make a linear function (output will equal input); exponents greater than 1 will create the effect of an exponential curve as the base numbers in the left inlet go from 0 to 1; exponents between 0 and 1 will create the effect of a logarithmic curve as the base numbers go from 0 to 1.

This patch shows how a single curve in a function object can be used as a lookup function that emulates an exponential curve.

In function, a curvature value of 0 makes a straight line, a positive curve value gives a quasi-exponential curve, and a negative curve value gives a quasi-logarithmic curve. When the function is in Curve mode, you can cause the segment leading to a given point to be curved with the setcurve message. The settings in the message box show the different messages that can be used to change the appearance and behavior of function, as they were used to set up the initialization of this patch.