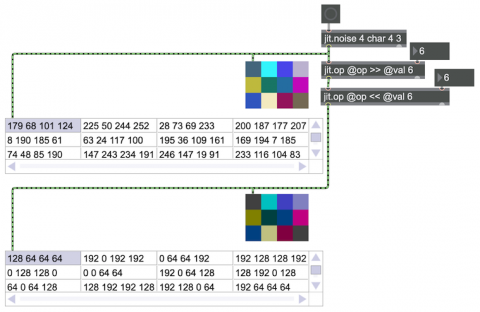 A Jitter matrix in which the cells represent colored pixels—such as a video—normally has four planes of 8-bit (char) data, representing the values of the alpha, red, green, and blue components of the color. If you wanted to reduce the bit depth of that color information to fewer than 8 bits, which would reduce the total number of colors in the image, a simple way to do that is to shift all the bits to the right (so that the least significant bits are lost), then shift them back. That's equivalent to doing an integer division by a power of two, then multiplying by a power of two.

In general a rightward bit-shift is a computationally efficient way to perform an integer division by a power of two, and a leftward bit-shift is the same as multiplying by a power of two. When you shift the bits of an unsigned integer (or char), some bits will be lost, reducing the bit precision of the number. Reducing the bit depth is an efficient way to degrade an image (or a sound).