Checkerboard pattern in a matrix 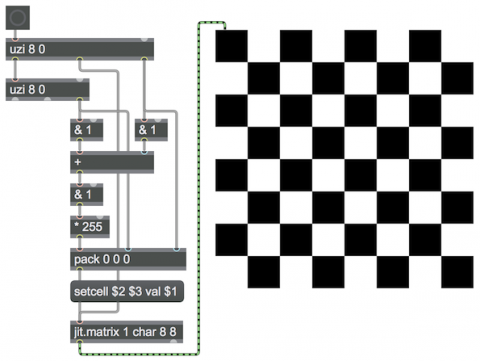 This example shows a way to set the contents of a 2D Jitter matrix. The task in this case is to fill the matrix with a checkerboard pattern of alternating black and white squares, which is to say alternating 0 and 1 cells. The example uses two uzi ojbects as a way of instantaneously stepping through each cell of the matrix; one uzi steps through the rows (the y dimension) of the matrix, and for each row the other uzi steps through the columns (the x dimension). The & 1 object is a good way of determining whether a number is odd, since any odd integer will have its least significant bit set, which is to say it will cause a 1 to come out of the & 1 object. So, every cell number that is odd-numbered in one dimension but not the other will result in the cell being set to 255 (white). The calculated cell value is packed together in a list along with the x cell number and the y cell number in pack, and then a message box is used to make a well-formed setcell message, setcell <x#> <y#> val <value>, to go to the jit.matrix object containing an 8x8 matrix.

For another way to complete this same task, see "Checkerboard pattern with jit.gen".