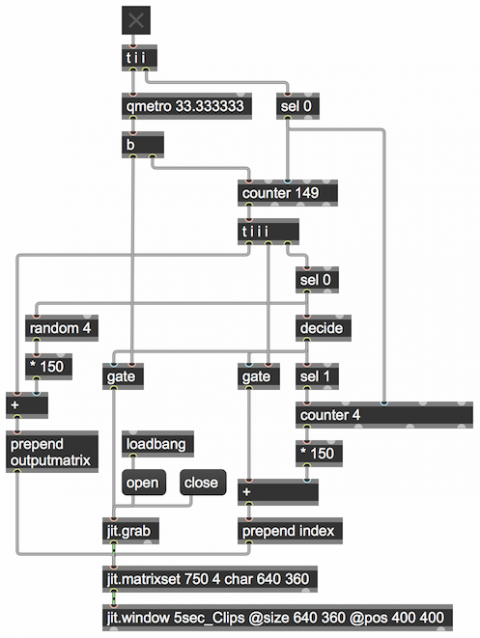 This patch shows a way to capture and play back excerpts of live video. It uses jit.matrixset as a circular buffer to hold selected frames of live video from jit.grab, and it uses the decide and random objects to make arbitrary decisions regarding when to record and which excerpt to play back.

The jit.matrixset object allocates memory in which to store and recall matrices, in this case frames of video. The jit.matrixset in this patch has been initialized to set aside memory for 750 frames of 640x480 video. (At 30 frames per second, 5 seconds is 150 frames, so five such excerpts will total 750 frames.) The counter at the top responds to the qmetro and counts repeatedly through the 150 numbers 0-149. At the beginning of each cycle, it uses the decide object to decide whether or not to open two gate objects that will let the numbers from the counter through to specify an index number in jit.matrixset and will let the frames of video from jit.grab be stored. If decide sends out 0, the gates are closed and nothing happens; if decide sends out 1, the gates are opened and 150 frames of video are stored in jit.matrixset. (Note that the lower counter and the * 150 object create an index offset within the jit.matrixset in multiples of 150—0, 150, 300, 450, or 600— to fill up different regions of the 750 total frames.)

At the same time, at the beginning of each 5-second cycle, the random object is triggered and randomly chooses one of those 150-frame offsets from which to output frames of video from jit.matrixset, with the outputmatrix message.