Binding a pattr object to another object 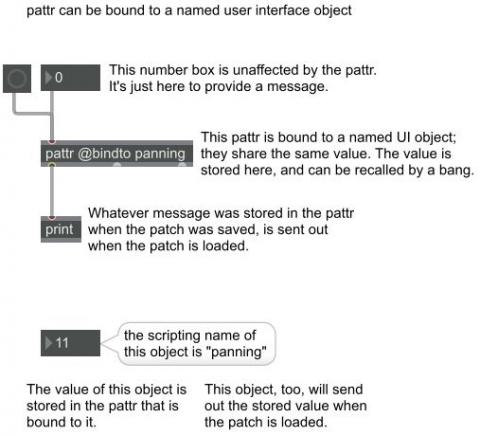 A pattr object can be bound to another object, so that the two objects share the same data. By setting the pattr's bindto attribute, you can bind it to any other named pattr object, or a user interface (UI) object that has a scripting name. In this example, we have set the scripting name of the number box at the bottom of the patch to panning in the object's Inspector. That allows us to bind it remotely (with no patch cord) to the pattr. (Incidentally, although it's not demonstrated here, you can also bind a pattr to a UI object, even an unnamed one, by connecting the UI object to the pattr's middle outlet.) Once the two objects are bound together, any change to the contents of one of them will be shared by the other, and the contents can be recalled from either of them with a bang. Also, both of them will send out their stored message when the patch is loaded.