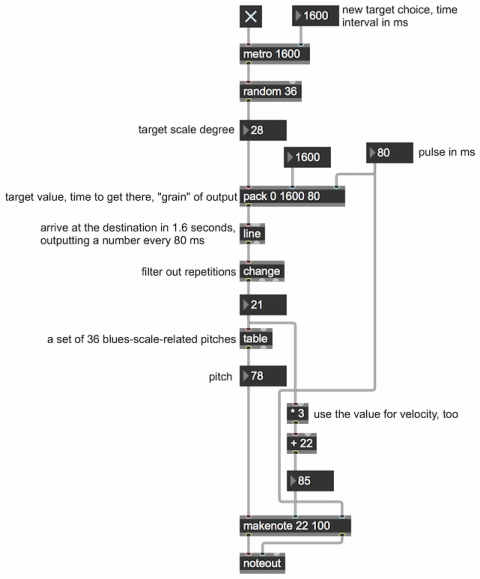 This patch shows an idea for an automated improvising algorithm. At regular intervals of time, which one might think of as the length of a musical phrase (every 1.6 seconds in this example), the metro object chooses a new random number from 0 to 35. That number will be considered a target number toward which the line object should go. The number is packed into a list along with a destination time of 1600 milliseconds and a grain of 80 milliseconds, to tell line to go to the target number in 1600 ms, outputting an intermediate number every 80 ms (roughly every 1/12 of a second). The numbers that come out of line are used to look up a MIDI pitch number in the table. The table has been filled with a configuration of pitches, saved in the patcher file, that outline a bluesy scale, essentially a Dorian mode with an added #4 degree. The number from line is also used to determine the velocity of each note, causing the melody to crescendo as it ascends, and diminuendo as it descends.

Crucially important to this algorithm, the change object is used to filter out repetitions that inevitably occur in the output of line. In the time of each 1600 ms phrase, line will output 20 numbers (1600/80); if the difference between the new target and the previous target is less than 20, as it frequently will be, some repetitions will occur. Since change filters those out, we get unpredictable pauses in the melody, resulting in syncopated rhythms. While not musically "intelligent", those unpredictable rhythms combined with the blues-inflected pitch choices evoke the impression of a (quite mediocre) jazz improviser.