Apply a texture to a shape in OpenGL 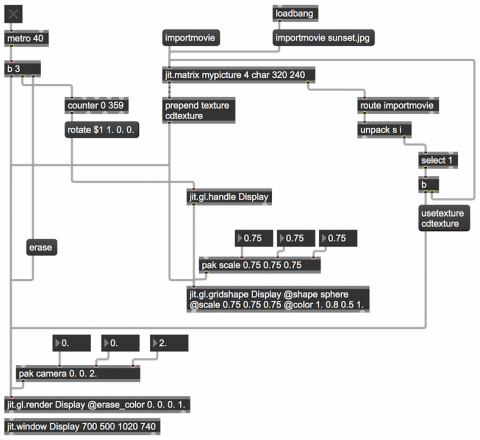 The OpenGL object jit.gl.gridshape allows you to create and render standard 3D geometrical shapes (cube, sphere, cone, etc.). It creates those shapes using a number of polygons attached together on a grid, thus its name. To make those objects look a bit more interesting—either more realistic or more unusual—you can apply a texture to the surface of the object. The visual content of the texture comes from a 2D image matrix (e.g., jit.matrix) which then gets wrapped around the object's surface. For example, you could use an image of a granite countertop and apply it to sphere, giving the impression of a granite sphere.

When the patch is opened, we import an image of a sunset into the jit.matrix object, using the importmovie message. When you do that, the object tries to find and open the file. (You should identify the file by a complete path name, or the file should be in the Max file search path.) As soon as it has done that, the object then sends an importmovie message out its right outlet with two arguments: the name of the file and a "success flag", 1 for success or 0 for failure. So our patch uses the route object to look for that message, disregards the file name, and looks at the success flag; if the success flag is 1, it sends a bang. That bang first triggers the jit.matrix to send out its matrix address, jit_matrix mypicture. To that, we prepend the words texture cdtexture, so that the full message to the jit.gl.gridshape object will be texture cdtexture jit_matrix mypicture. That sets the object's texture attribute to the name cdtexture, which points to the matrix mypicture. We also send a usetexture cdtexture message to the jit.gl.render object, so that it, too, knows about this texture. Now each time that the shape is rendered, it will use that texture.

We included the ability to import a different image as the texture, to resize the sphere, and to move the camera. We also included a jit.handle object, which makes it easy to rotate the sphere. In this case we've linked the rotation to the frame rate of rendering, so that each time a new frame is displayed, the rotation around the x axis is incremented one degree by the counter.