Amplitude envelope with the function object 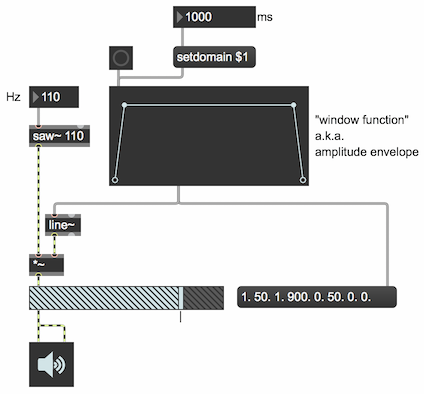 You can think of every individual sound as being surrounded by silence. You could imagine that, as in MSP, sound is always present, but during the silence its amplitude is 0 (the sound is being multiplied by 0), and when the sound is audible it is being multiplied by 1 or by some other nonzero number. Thus, the sound is audible only when its amplitude is being controlled by a nonzero value––a conceptual "window" is opened on the sound allowing it through––and the rest of the time it's being multiplied by 0 and the conceptual window is closed. This idea of a "window"––a period of nonzero values surrounded by 0 before and after––is an important concept in digital music and in digital signal processing. A sound that is off (0), then is instantaneously switched on (1), and then is later instantaneously turned off again (0) has been windowed with a rectangular-shaped function. More commonly in music software we use a window shape that is not exactly rectangular, such as a trapezoidal window with tapered ends, to avoid clicks.

This example demonstrates the use of a function object to create a trapezoidal window signal coming out of the line~ object to control the amplitude of a sawtooth oscillator. Each time function receives a bang, it sends out a list that says, "Go to 1 in 50 milliseconds, stay at 1 for 900 milliseconds, then go to 0 in 50 milliseconds." The changing values from line~ are used as the multiplier controlling the amplitude of the oscillator, opening a 1-second window on the sound.