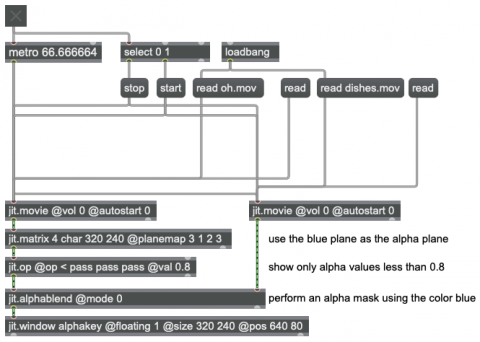 The jit.alphablend object uses the alpha channel of one image (the 4-plane matrix coming in one of its inlets) to determine the opacity of each of that image's pixels, and composites that image with the image coming in its other inlet. This patch uses two of the example videos provided with Max to demonstrate.

The two example movie files, "oh.mov" and "dishes.mov", are read into two jit.movie objects, and the display of those videos is triggered by bang messages from the metro (or qmetro) object. The video "oh,mov" has a blue background, so for this example we can simplistically use the color blue to determine which pixels we want to make transparent. The jit.matrix object's planemap attribute allows us to specify how input planes should be used in the output. In this case, we have specified that plane 3, the blue plane, should also be used in place of plane 0, the alpha plane. In effect, wherever blue appears strongly in the input image will be used to determine transparency when we composite the image with another video. We pass that through jit.op and use the < operator to turn all alpha values that are less than 0.8 to 1., and turn all alpha values that are greater than or equal to 0.8 to 0., while passing the other three planes through unchanged. Now we have an alpha plane that consists only of values 1 or 0. The jit.alphablend object then uses those values to determine the mix between the two video matrices. (Note that the matrix in the right inlet must come in first, since the matrix in the left inlet triggers the mixing calculation.)