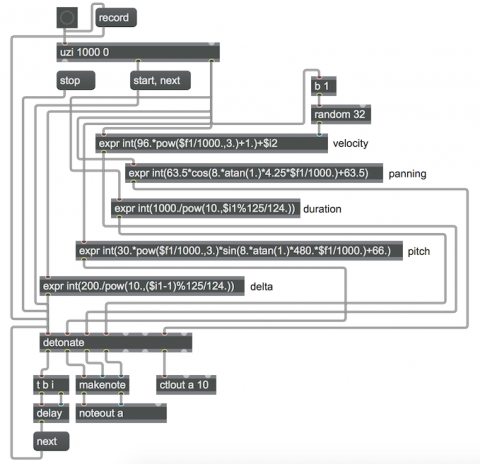 This patch is based on an example in the Max 3.5 Tutorial, chapter 44. It demonstrates a) the use of math functions to generate patterns for musical parameters and b) faster-than-realtime recording of MIDI data in the detonate object.

The detonate object is a multi-track MIDI sequencer. You can use it to record note information by sending it a record message and then providing (in the first five inlets) vital MIDI note information consisting of delta time (the change in time from the onset of the previous note), pitch, velocity, duration, and channel. (You can also store ancillary information, such as controller data, along with each note event.) Then, to play that information back, you send detonate a start message, followed by a next message telling it to send out the next note. Because the time-till-the-next-note (i.e., the delta time of the next next note) comes out the left outlet, you can use that to determine how long to wait before sending the next next message.

The uzi object will send out a fast-as-possible ascending series of numbers (and a bang for each one) in response to a single bang. In this example it instantaneously sends out 1000 numbers going from 0 to 999. Those numbers are plugged into various mathematical expressions to create specific functions (curves or shapes) over the course of 1000 notes. That information is recorded by detonate as note information, and when uzi is done it triggers start and next messages to begin playing the notes.

The effect of those expressions is described in two pages from the Max 4.6 Tutorial manual. (Note, the manual refers to a -1 object after the right outlet of uzi, an object which existed in the original because uzi could originally only count starting from 1. In more recent versions, uzi can be instructed to start counting from any number, so we have set it to begin counting from 0, thus removing the need for the -1 object.)