Adjust brightness and contrast on a 1-plane char matrix 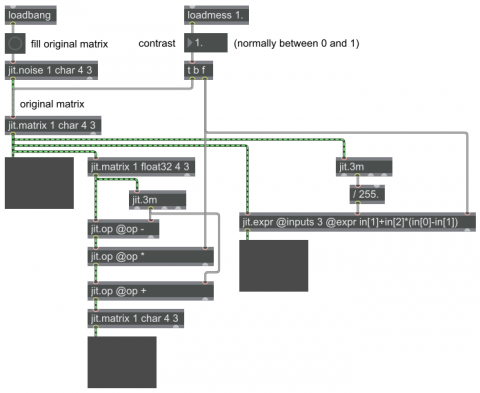 Brightness and contrast are explained briefly in Jitter Tutorial 7: Image Level Adjustment. The common Jitter object for adjusting brightness, contrast, and saturation of an image is jit.brcosa. You might wonder, though, what math is used to adjust brightness and contrast. Brightness is just multiplication, so you could simply use the jit.op object with @op * as the argument (or the equivalent jit.*). Contrast is a little more complicated and there are various ways to calculate it, but the most common way is to move all values toward or away from the mean value. This example show a few ways to do that with a 1-plane char matrix.